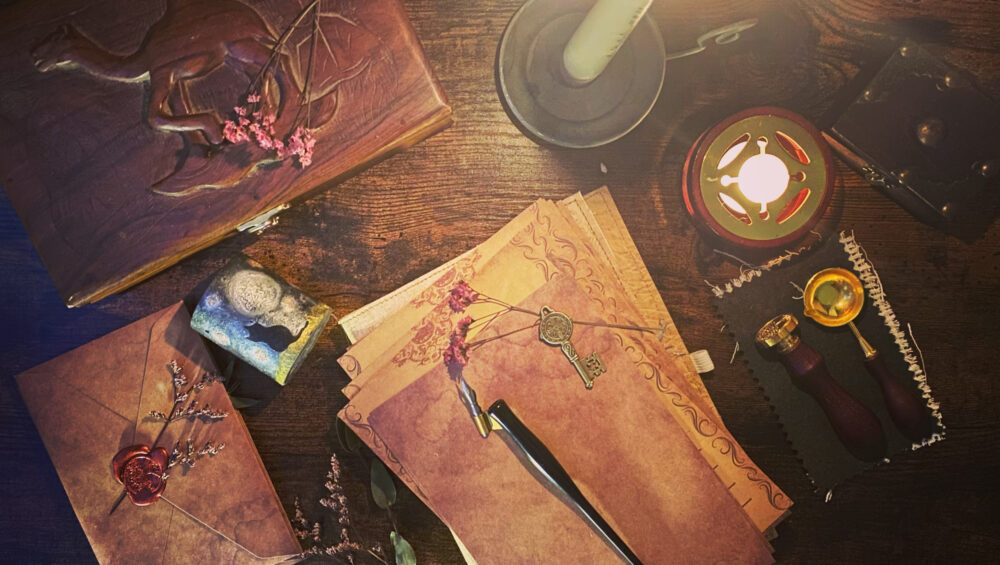 Amidst the rush of London’s West End streets at Tuesday’s 6pm, Soledad found herself wishing to be just about anywhere else. She pulled up her raincoat collar and tried to find a quieter alleyway. Even though her beanie with hanging pom poms on the sides were hiding her ears well and her big gloves concealing her hands underneath, she felt uncomfortable.

The absolute chaos of human life had always perplexed her. She remembered Sila mentioning London was perhaps amongst the best places on Earth to go to if you wanted to be invisible. Even an invisibility cloak couldn’t hide you as well as London’s madness at rush hour.

She took out a small silver item from her pocket that instantly turned into glowing red as she held it in her palm, she unwrapped it and revealed a golden bar, which was very rapidly changing colours from golden to silver to blood red to pastel blue. She took a bite at pastel blue and felt the solid bar turn instantly into gooey caramel in her mouth.

She felt better. Wrapping it back up, she neatly placed it back in her pocket and smelled the air. Other than the familiar pungent smell of ammonia associated with the side alleys of London, she could just about smell a whiff of strawberries coming from the right. That must be where she ought to go.

As she took the third right, further entering the lesser known Chinatown alleyways, the scent of strawberry grew stronger and the air turned a slight pink tint. It always amazed her that the humans around her couldn’t see it, except for perhaps that guy in fedora? Or maybe not. Maybe he was just stoned.

She pulled the hood over her head, thankful for the drizzle that had just started. Hood was her safe place. Her mind kept going back to the Academy, and how late she was in finishing her assignment for tomorrow. If only the messages didn’t come so late…

Slowly, as she followed the strawberry trail, the scent grew stronger and now she could distinctly smell cherries in the mix. Following it obediently, she ended up in front of a door which was evidently the source of pink and scent.

She wasn’t a fan of strawberries or pink.

On her three ticks on the metronome attached to the door, the sound of bells got clearer and the door turned into a glowing blue portal, she sighed and entered.

“Up to no good again, you lot?” Ada asked her from her shockingly pink patched armchair by a purple glowing fire that floated mid fireplace. The room inside was chaotically painted in a sea of colours. It was an assault to the senses.. Each wall shaded in pinks, reds and purples. The furniture covering every inch of the small living area, also brightly shaded. It always made Soledad feel claustrophobic.

“Oh well, you know us, saving the world and such” She replied

Ada snorted in reply. “Always at my inconvenience, Soledad. Always.” She ended her remarks with a smirk, as the floating kettle poured a whole lot of burgundy, thick drink in her mug that flashed the words “Not Your Good Girl” in changing colours.. Ada was a very thin woman with her prominent snout and pointy ears. Zitharians were part wolves, but they had the ability of putting an illusion of human face when out and about in the human world, if need be.

Soledad took the seat at the Messenger’s Table. Instantly, the clutter of letters and Ada’s eccentricities vanished from it and it was converted into a wooden writing desk. There were coloured boxes of wax and a neat pile of writing papers and envelopes. On the right was floating just above the table, a quil, that was changing colours and nibs. There was an old chest full of keys on the left of the table next to an assortment of stamps and dried branches. As soon as Soledad held the quil, it turned black, the nib settling on a thin number 2. She poured a few pieces of red wax into the spoon and it instantly lit underneath, melting the contents right away. One of the papers floated out of the neat stack on the left corner and landed in front of her.

Soledad was beginning to get a headache with the strawberry scents and flashing colours of Ada’s den, so she quickly jotted down the message:

“Tonight, ravens are flowing high, their wings will be Red.

Calendar will be set to right..

She signed it: Yours, Ghost of the East.

She finished and took a second to stare at it, tucking her curly black hair behind her pointy, heavily pierced ears. She folded it and neatly placed it in the envelope, carefully picking a key with its bow, a weird symbol of entwined spheres. She took a flask out of her coat which seemingly was filled with miniature gem stores. She took out a few and together with the key, enclosed them inside the envelope. She finished the job by sealing it with a stamp of a tree growing downwards.

As soon as she was finished, the writing table turned into an ordinary table full of Ada’s mess.

“No More, Ada” Soledad replied, getting up. Ada chuckled but didn’t remark.” Priority service, then?” She asked

“Always.” Soledad replied. Ada got up and took out a very rusted brewing pot from a cabinet, proceeded to take out a jar of glowing indigo liquid, poured a few drops in it and whispered “Raven”

Soledad handed her the sealed envelope and watched it vanish into the glowing liquid in the pot as Ada chucked it in.

Soledad reached into her large cargo pockets of the coat and took out a jar of what looked very much like dog treats (but they weren’t), counted 20 and handed them to Ada who placed it inside her apron pocket.

“You take care, Ada” Soledad said, before vanishing into the portal and thanking the heavens when the migraine inducing colours and strawberry scents were behind her.

Somewhere in the ruins of Llansteffan Castle, a sealed letter fell on the fort wall from the sky, instantly vanishing into thin air. A girl of about 11, human, saw it.

Thing about humans is that they love extremes.  They either love being the hero or the villain, there is never much of an in between with them. Thing about Syths is that they are loners. They don’t pride themselves in generosity or heroism, they are travellers and miners, they pride themselves in unparalleled work and finding things that are lost to any other species’ eye.

They also pride themselves in their pointy ears and 6 fingers on each hand. They love their differences. However, when it comes to arrogance, humans, again, take the lead. Reason why Syths and humans don’t ALWAYS get along in all circles, they both boast.

That is also the reason why Soledad always felt like an outcast: she didn’t like to be pointed out. If she were to flash about her pointy ears and unusual many fingers on each hand in a human settlement, she’d fear limelight, and even maybe snarky comments. Besides, she had been on the run for so long, she was used to it now.

Confrontation was something she despised.

That didn’t mean she wasn’t good at it when time asked for it.

After sending off her Raven to the Headquarters, Soledad decided to find the portal out of the human settlement and back to the mountains in the mirror world, where she could find a nice Sythian inn and call it a day. However, as soon as she left, there was something different in the air. There was a clear aura of black around the buildings and the faint scent or rot was about. Something was not right, and she could feel it in the pit of her stomach.

She quickened her pace. She was taller than a normal Syth. She was a lot more things than normal many. However, the sky changed colour and the vision faded into a tunnel before she could teleport near the growing black roses on a regular bricked wall that supported a flashy sex toy shop in soho. A dog was casually peeing on it. However, the dog, the sex toys, the grey and black humans all faded and suddenly it was darkening, she saw  the silhouette of two massive wings behind her, she turned.

The figure standing behind her was tall, maybe 7 feet. The wings were now folding behind it… there was a hood on its head but the bright yellow aura around its wings was blinding. Soledad winced, stumbling backwards

“Soledad Kay’la-Li” the person spoke, the voice rang through her mind and she felt dizzy. “You have been summoned to the court of Mages at the Hall of Forbearance tomorrow at noon, you will be escorted.”

As soon as the voice stopped, her vision started recovering and where a second ago there was a higher mage, there was the regular rush of Soho, the dog had just finished peeing under her black roses. Dazed, she touched the rose vine and the bright blue portal appeared instantly. Soon she was through and on the other side.

Sign in Create an Account
Lost your password?
Select the fields to be shown. Others will be hidden. Drag and drop to rearrange the order.
Click outside to hide the compare bar
Compare
Compare ×
Let's Compare! Continue shopping
Top
Shopping cart close